About The Old Carrabelle Hotel

A History Full of Mystery

Lovingly restored by innkeepers Kathy and Skip Frink, The Old Carrabelle Hotel opened for business on July 4, 2002. However, the hotel’s lengthy and somewhat mysterious history reaches back to 1900.

While old county records are somewhat sketchy, there is enough word-of-mouth evidence to place the original construction of the inn around 1900, the year after the storm of 1899. Some old-timers say the first use of the property was as a railroad hotel, serving the line from Tallahassee that ended in a spur where the Carrabelle Volunteer Fire Department currently stands. 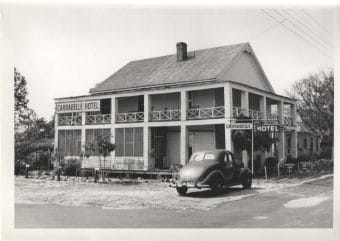 Across the street was the old Coombs sawmill (now the old Gulf State Community Bank property), where workers prepared cypress and other woods for transportation by rail and schooner. This is why some local historians believe the property may have been either home to the sawmill manager, or used as a transient boarding house.

Starting in the 1920s, the Gray family (who still reside in Carrabelle) owned the property as their home for 20 or 30 years. The first family photo proof is dated Christmas of 1938.

During World War II, when Carrabelle became the amphibious training base for the Normandy invasion, there were quite a few rumors that the inn transitioned to a brothel. Yet, ownership as well as the purpose of the hotel remains unclear until after the war, when the hotel is depicted in a snapshot as the “Carrabelle Hotel.” This photo now hangs in our hotel lobby.

In the 1950s, Captain Leon Langston, one of Carrabelle’s busiest deep-sea charter captains, made the property his showplace family home. Years after the death of Leon and his wife, their son David sold the property to Weldon Vowell, of Texas. When Weldon decided to move his business to Panacea, he sold the property to Skip, Kathy and partners in May, 2001.

Skip and Kathy, along with a team of dedicated friends and contractors, completely renovated the property, including A/C and additional bathrooms. On the 4th of July in 2002, The Old Carrabelle Hotel officially opened its doors, and the house was booked all weekend. 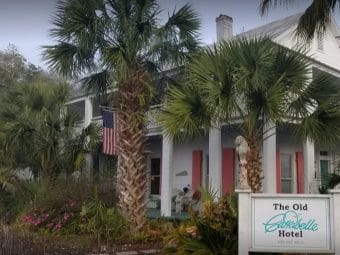 Today, The Old Carrabelle Hotel offers a truly magical combination: historical charm, an easy-going Key West style and modern conveniences. The inn features five themed hotel rooms with private baths, in-room cable TV and high-speed WiFi as well as living and dining room guest areas. At the heart of the property sits a lush Key West courtyard, complete with tables in the sun and shade, a gas grill and a wet bar.

The Old Carrabelle Hotel also includes the Winchester Cottage, nestled under majestic oaks right up the street from the main hotel. One of the few remaining authentic Florida coastal cottages, this 1933 vintage bungalow is located only five blocks from the harbor and two miles from the beach.

Hotel guests can stop by the lobby Monkey Bar to enjoy seeing friends or take in scenic town views from the inn’s wraparound verandas. The Old Carrabelle Hotel is a block from the harbor and five minutes from the beach. The historical town of Apalachicola and sunny St. George Island are just minutes away down coastal Hwy 98.